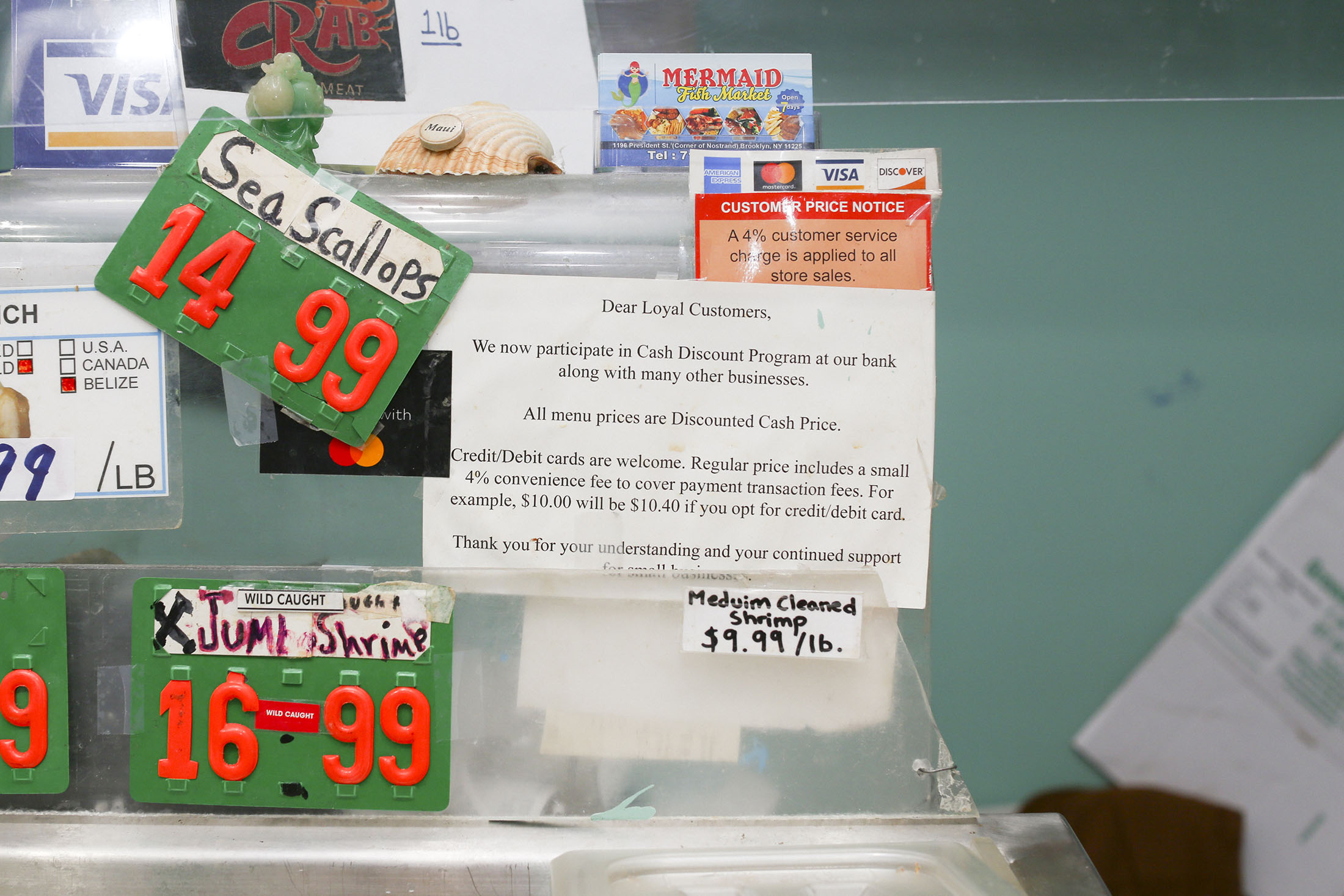 In Central Brooklyn, notices are appearing near the registers of a growing number of small businesses. “Dear Loyal Customers,” many of them begin, before announcing a “discount”: The displayed prices reflect a reduction for those paying with cash. Prices for credit and debit card sales are 4% higher.

As the economy marches away from cash—a trend hastened by the growth of digital alternatives and, more recently, by sanitary concerns over Covid-19—and electronic transaction fees take bigger bites out of retailers’ sales, a small but increasing number of businesses are nudging their customers in the other direction. That’s in defiance of a hostile legal landscape and what’s always been assumed to be Consumer Psychology 101—don’t punish shoppers for their payment choice. Along a mile or so stretch of Nostrand Avenue in Brooklyn, for example, at least five businesses give preferential treatment to cash buyers. Several are getting help from, of all places, the payment industry itself.

Credit cards, of course, are extremely convenient for businesses and customers alike. But the convenience comes at a cost borne mostly by merchants. In 2019 swipe fees for credit card transactions amounted to $93 billion in the U.S., or 2.2% of credit card sales, according to Nilson Report. Small merchants lack the muscle to negotiate lower rates with payment processors or ways to tweak the interchange fees that credit card companies themselves charge. For them, the transactions cost much more: 2.8% in stores and 3.1% online, according to consulting firm CMSPI.

“It’s unseen money,” says a Nostrand Avenue retailer who began adding a surcharge about six years ago and asked not to be identified so as not to draw the card networks’ attention. “I’d add up the monthly bill, and it would come to $600. It would be about 3% of my sales.”

Credit cards that reward consumers with cash back or travel points have higher transaction fees than other cards, which rubs some merchants the wrong way. “If you pay attention to the television commercials for these cards, you would think those rewards were coming from the producer of the credit card, when instead they’re coming from the retailer,” says Jerry Walsh, who owns Mayday Hardware in Brooklyn’s Prospect Heights neighborhood. “If I’m the one paying for the reward, shouldn’t I get the credit for that?”

In Australia, merchants were first permitted to surcharge card transactions in 2003; by 2014, according to the Reserve Bank of Australia, 43% did so. In the U.S., retailers have tried over the past several decades to loosen the rules imposed by credit card companies, but the wins have been few. Federal law has protected cash discounts since the 1980s, but card networks made it difficult to use them until Congress intervened again in 2010. Surcharging became possible only after major credit card companies, attempting to settle antitrust lawsuits, began to allow it in 2013.

Neither Visa Inc. nor Mastercard Inc. will disclose how many merchants have reported their intention to surcharge, and many other businesses never tell the credit card companies that they’re surcharging. According to the referral website Merchant Maverick, most payment processors in the U.S. offer a program that automatically calculates surcharges or discounts and properly displays them on receipts, and many now specialize in that.

But adding a surcharge remains chancy for merchants. For example, the notices appearing in Brooklyn, which were provided by a payment processor, are ambiguous, using the term “discount” to describe what sounds like a surcharge. Card network rules bar surcharges on debit cards. (They may also violate New York law, which requires merchants to display separate cash and credit prices for every item.) Mayday Hardware has separate notices that describe two different programs. Other merchants don’t have any signs disclosing the surcharge at all.

“We actually discourage this practice,” says Leon Buck, the top lobbyist on financial issues for the National Retail Federation, which would rather save money for merchants and their customers by tightly regulating swipe fees. The surcharges, he says, “are adding to the problem rather than helping.”

Industry representatives and observers insist big merchants will never risk alienating their customers by making them pay their transaction costs. American Express Co., in an April 2020 study, found, among other things, that three-fourths of consumers would refuse to pay a surcharge—they’d pay cash, shop elsewhere, or leave empty-handed.

But on the ground, proprietors say they’re seeing something else. “In the beginning, there were complaints, but now everybody’s used to it,” says Angel Martinez, proprietor of the Mermaid Fish Market in Brooklyn.” Many say customers, to their surprise, are forgiving. “They understand, because I tell them about it,” says the Nostrand Avenue retailer. “It doesn’t just appear on their receipts.”

And while some merchants report a modest number of customers switching from credit to cash, at Mayday Hardware, Walsh says his credit card sales have actually increased. “We Americans have grown accustomed to low nuisance charges and simply accept them as a way of doing business,” he says. “I think it’s becoming the new norm.” If Walsh is right, it may not be long before his much larger competitors follow suit.

Accepting Credit Cards: Why It’s Worth It by Elie Y. Katz, Forbes